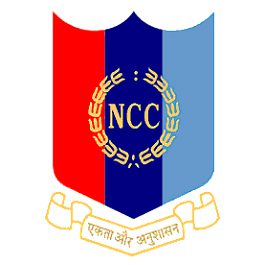 The National Cadet Corps (NCC) is a prestigious tri-services organization consisting of Army, Navy, and Air Force wings, to groom the nation's youth into disciplined, patriotic adults. With the motto of ‘Unity and Discipline’, it aims at developing character, comradeship, discipline, a secular outlook, a spirit of adventure, and ideals of selfless service. NCC has huge potential for country building with a feeling of Duty, Commitment, Dedication, Discipline, and Moral Values.

The indelible impression on the cadets’ personalities during the course of their NCC journey helps them throughout their life. Many of them have successfully joined the Indian Armed Forces and are excelling firmly in their chosen fields.

NCC, with a substantial strength of more than 13 Lakh cadets, also provides an environment conducive to motivating the youth to join the Indian Armed Forces. The indelible impression on the cadets' personalities during the course of their NCC journey helps them throughout their life. Many of them successfully join the Indian Armed Forces and excel firmly in their chosen fields.

A preference is given to B and C certificate holders in the Defence Services, Police Administrations, Para-Military Forces, Fire Forces, BSF, Territorial Army, Industrial Security Forces, and Public Sectors. Moreover, there is a special NCC entry where the ‘C’ certificate holders can directly appear for the SSB interview to become commissioned officers in the armed forces.

Financial aid and relief to cadets are provided by the Cadet Welfare Society (CWS). Many educational institutions have allotted a special quota to NCC certificate holders. It is fortunate that the Indian youth have an organisation like NCC where they can nurture themselves in a splendid way.

The National Cadet Corps, the youth wing of the Indian Armed Forces, was formed under the Act of 1950 by the committee headed by H N Kunzru for establishing a nationwide cadet organization for the students in schools and colleges on a voluntary basis as a Tri-Services Organisation, comprising the Army, the Navy and the Air Wing for grooming the youth of the country into disciplined and patriotic citizens. To ensure equal opportunities, in 1949, the Girls Division was raised. The NCC was given an inter-service image in 1950 when the Air Wing was added, followed by the Naval Wing in 1952.

On 12 Oct 1980, "Unity and Discipline" was selected and declared as the motto for the NCC.

To Develop Character, Comradeship, Discipline, Leadership, Secular Outlook, Spirit of Adventure, and Ideals of Selfless Service amongst the Youth of the Country.

The NCC is headed by the Director-General (DG), assisted by two Additional Director Generals (ADG) with Five Brigadier level officers and other civil officials.

17 located in the state capitals headed

3 located in Mumbai, Delhi and Bangalore.

14 GQ, Depending upon the size of the state and growth of NCC in the states.

Each Battalion consists of companies which are commanded by the Associate NCC Officer (ANO) of the rank of lieutenant to major.

In all there are 96 Group Headquarters in the country;


There are two training establishments namely


Besides this Vice-Chancellors of various universities across India are conferred with the honorary rank of commandant in NCC, to promote and support NCC in their respective universities.

The Army Wing (Senior Division) of the college comprises 160 boy cadets with the distribution roughly as 55+55+50 for the first, second, and third-year respectively. The wing comes under 3 Delhi Battalion, Group C and is ably headed by Associate NCC Officer Captain Keshav Kumar Saini.

For more information on NCC, go to: